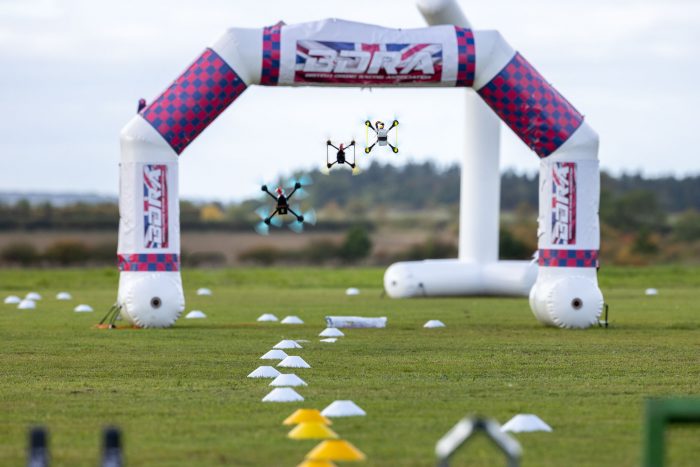 The BDRA British Championships took place at BMFA Buckminster on Saturday 1st and Sunday 2nd October. The Top 60 UK Pilots as ranked by qualifying events ran by either BDRA or their affiliated clubs were invited to compete – of which events 15 were completed this season.

On the Friday before the event, the BDRA Team battled with heavy rain and winds to try and setup the track ready for the event. In the end, after chasing several pieces of track equipment across the length of the Buckminster site, they conceded to taking shelter in the Race Director’s trailer (albeit slight leaky!) followed by a visit to a warm local pub to warm up. This meant an early start on the Saturday to ensure the track was ready for the competitors.

Meanwhile, next door, the team from Drone Racing Streams (Elliot Naseby and Jon Timms) were busying themselves setting up the streaming equipment ready to broadcast the Championship event to the world via YouTube. The stream was sponsored by VelociDrone (FPV drone flight simulator) with hardware supported by HDZero – allowing us to capture and broadcast both analog and digital video feeds in a single hardware solution.

Check-in began bright and early on Saturday morning with 57 out of the 60 Pilots arriving to compete. At check-in Pilots received their qualifying Pilot event t-shirt along with a goodie bag from a couple of our generous sponsors Torvol and HQ Prop. Matt Andrews, professional e-Sports and well-renowned Drone Racing commentator, also arrived to co-host the livestream with the Drone Racing Streams crew. If you wish to watch the livestream back to see some of the racing action head over to the BDRA YouTube channel: https://www.youtube.com/@britishdroneracingassociation/streams.

After a final check over of the track by the designer Josh Gottesman, and pegs firmly applied, we got underway with the 1st of 10 qualification rounds to sort these Top 60 Pilots into their final’s groups for Sunday afternoon.

The 1st round of any BDRA qualifier is looking to set the ‘maximum lap’ count per heat for the rest of event based on the number of laps we see from the Pilots in this initial round. This method has been developed over the past few years from Pilot feedback and seeing a substantial number of lipo battery fires during events where Pilot were pushing constantly just to get that ‘one extra lap’ rather than concentrating of completing their laps in the fastest time.

This year’s championship track was sizeable and a lap cap of 4 was set for the rest of the event. This lap cap was met by the Top 50% of Pilots consistently over the course of the event within the 2 minutes (and 30 seconds to finish their lap) time limit. However, it is not mandatory for this benchmark to be hit – and it is for Pilots to complete the most laps they can within the 2 minutes (+30 seconds) which will still accumulate them laps/time towards their finals group position.

As per Buckminster tradition – the high winds stayed with us through the day on Saturday battering the track equipment and testing our Pilots skillsets to the maximum as they attempted to cut through the brisk breeze being thrown at them to lay down their best times. We still however managed to complete 7 rounds of qualifying just before the night fell.

To add another little angle to the competition this year we also had a ‘last chance raffle’ – where if a Pilot came last if their round our Membership Secretary (David Allen) would come and seek them out with a raffle ticket which they could put into a pot to win one of 3 great prizes as part of the prize giving ceremony.

As the night quickly drew in on the Saturday evening we huddled under the BMFA gazebos for our well-attended AGM – before heading out to the local Chinese buffet restaurant (and taking over half of their tables for the rest of the evening!

On Sunday morning we woke to a substantially calmer Buckminster, inflated and inspected the track, and got going with a further 3 rounds of qualification. We had a good mixture of Pilots just wishing to hold their positions and others wishing to push that little bit harder to cross the threshold into that next final’s level. By noon qualification was completed and Pilots were allocated their finals via the Livetime Scoring Engine software.

Now we knew that one of 6 Pilots would be crowned this year British Champion – and it really was all to play for. The Pilots who entered the A-Final (in qualification order) were Saul Irving (Saul FPV), Alex Kubrak (AK), Liam Wood (iamwud), Owen Knight (Knighthawk), Alex Barton (Spartan) and Jacob Blakemore (Blakey).

The finals format is ‘Triple Finals for All’ – so this allows each Pilot to complete a further 3 rounds of flying to solidify their finals standing for the year. Points are allocated in the following manner – 10 Points for 1st, 7 points for 2nd, 5 points for 3rd, 3 points for 4th, 1 point for 5th and 0 points for 6th. If there is any tie on points it is then by total number of laps completed, followed by the fastest total time taken to complete those laps.

In the first round, we saw 4th place qualifier Knighthawk take last place after a very early collision, causing his lipo to disconnect and fail to gain a single lap, leaving with no points. There was a constant 3rd/4th place battle between Spartan and Blakey throughout the race – but with Saul and AK holding their 1st and 2nd positions solidly throughout. All Pilots completed their 4 laps with the fastest lap of 17.889 seconds coming from Saul Irving, but with all completing sub-20 second lap times.

In the second round, we saw the tides turn with Saul being relegated to 2nd place as Knighthawk came through with a win with 4 laps in 1:18.727, just overtaking Saul on the final lap – with less than 1-second gap between them. Alex Kubrak also came nipping at their heels with 4 laps in 1:21.389. A nice battle was seen between iamwud and Spartan throughout the race – constantly changing between 4th and 5th place – with iamwud coming out in 4th at the end.

Going into the third A-final round the final places were not at all set-in-stone – and this final race was a true decider. This round we saw a battle between Spartan and Knighthawk for 2nd and 3rd place with Saul dominating the 1st place spot all the way through. Saul finished a clear 9 seconds ahead of Knighthawk in 2nd place – crowning himself British Champion with a 1st, 2nd, 1st win.

Final results for the British Championship 2022 are:

Whilst there was the excitement of the main ‘A-Final’ to crown the British Champion – the results of another competition were also building in the background. This year was the inaugural year of the ‘Veterans League’ where Pilots aged 45 and over were battling out to crown their own Champion.

With qualifying ‘Veterans’ building points all year – this was the last event for them to top up those points to get to one of the podium positions.

Our thanks go out to the Team at BMFA Buckminster for the hosting and support of this event as well as our sponsors who gave us a record-busting cash and ‘physical’ prize pool to shower the winners of each final with!

Also a special thank you goes out to all those who have assisted in running the BDRA qualifying events this season. Without the group effort from organisers countrywide we would not have a table in which to build a Championship from.

Would you like to fly this year’s British Championship track or just ‘have a go’ at Drone Racing in general without the expense of crashing in real life?

Download the VelociDrone FPV drone racing flight simulator (www.velocidrone.com) where the official British Championship 2022 track has been re-created for you all to fly to your hearts content!

Once downloaded, just search for ‘BDRA Championships 2022’ to find the track. An aerial view ‘screenshot’ of the track in the SIM can be seen below.

Want to know more about the British Drone Racing Association?

Go to our website at www.bdra.uk or join us on social media on Facebook (https://www.facebook.com/BritishDroneRacing) or Instagram/YouTube (@britishdroneracingassociation).

Our 2023 membership will open on 1st January 2023 and costs just £10 for the calendar year. With this membership you can access discounts on BDRA qualifying race events throughout the year as well as being in with the chance to bag at place at British Championship.

If you have any other queries about the BDRA then please contact us via email at info@bdra.uk.